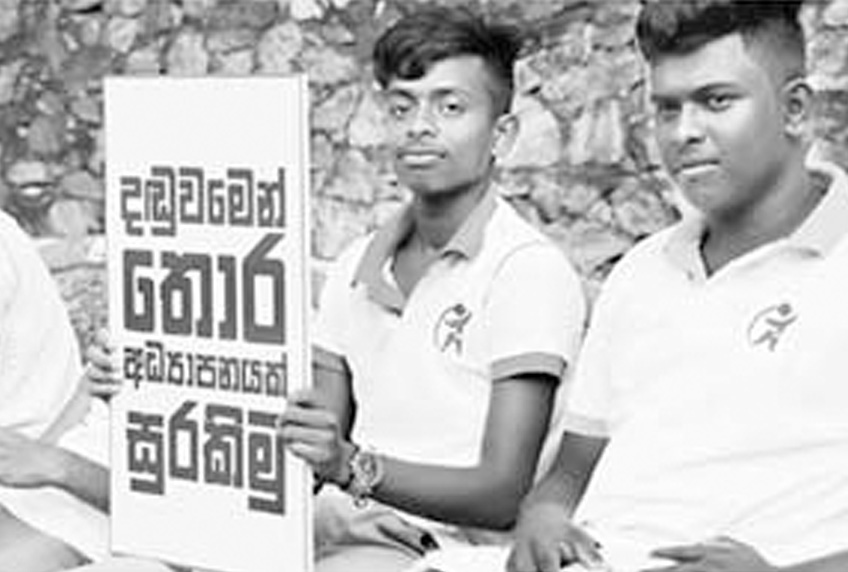 Over 250 Youth from the Alliance of Youth to End Violence Against Children (AYEVAC) gathered at the Vihara Maha Devi park on Sunday (7) to join forces against corporal punishment and psychological aggression. The gathering was part of the JUST SAY NO campaign organized by Stop Child Cruelty and supported by ChildFund Sri Lanka as part of its own advocacy efforts to ban corporal punishment by 2020.

ChildFund Sri Lanka said that research indicate that corporal punishment was associated with depression, hostility and lowered academic performance and psychological aggression had been associated with negative factors such as low self-esteem and self-doubt.

A 2017 study by the National Child Protection Authority (NCPA) on disciplinary methods practiced in Sri Lanka revealed that 80 % of students experienced corporal punishment in school, while 60% of teachers accepted that they corporally punished children.

"Corporal punishment and psychological aggression hinder the development process of a child and can critically affect their personality development, self-esteem and dignity. As a child-focused organization we believe for development interventions to succeed, protection plays a pivotal role," Acting Country Director for ChildFund Sri Lanka, Nalaka Siriwardena said.

Siriwardena said JUST SAY NO was an opportunity for youth to express their views through speech, poems, dramas and art, to add to the dialogue on the negative impacts of corporal punishment and psychological aggression, and bring into focus the need to end it in schools and homes. It was also an attempt to add to lobbying efforts to convince policy makers to amend discrepancies in the law relating to corporal punishment.

"Children can collapse mentally when they experience corporal punishment or psychological aggression. I have seen it. In order to become healthy adults and leaders of the future, they must be free of such mental stresses, 20-year-old Sameera of the AYEVAC from Dambulla said.

One of the highlights at JUST SAY NO was a panel discussion led by Sarath Wijesooriya, Hemantha Senanayake, Dr. Chathuri Suraweera, Dr. Asiri Hewamalage, Joseph Starlin and others.

The discussion provided an opportunity for members of the public and youth to raise questions for discussion.

The event is also aimed at involving children and youth in expressing their views on corporal punishment and enhancing a process to take their voice to the Parliament of Sri Lanka."JUST SAY NO was an effort to empower citizens of Sri Lanka to join the social revolution to provide safer and happier education for children without corporal punishment and to provide a platform for youth to participate and express their own views, "Chairperson of Stop Child Cruelty, Tush Wickranayake said. She added "Stop Child Cruelty are energized by the support from ChildFund, a seasoned campaigner in denouncing violence in society. We hope our journey together will be a historic and successful one."